In 1990 the United States Environmental Protection Agency (EPA) enacted the Pollution Prevention Act
with the objective to stop or reduce pollution at its source by eliminating or minimising the use of hazardous chemicals.

The term “Green Chemistry” was first used by a chemist named Paul Anastas working at the EPA at the time to describe such
non-hazardous chemicals. The definition of Green Chemistry adopted by the EPA was “Green Chemistry is the design of chemical products

and processes that reduce or eliminate the use or generation of hazardous substances.
Green chemistry applies across the life cycle of a chemical product, including its design, manufacture, use, and ultimate disposal. 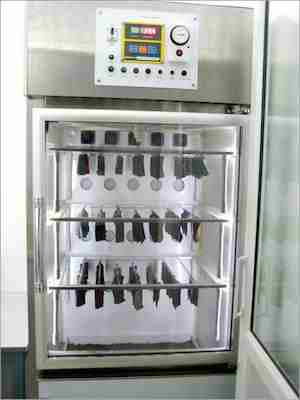 History of fungicides in leather

Some of the earliest products to be used as fungicides were organo mercury compounds (eg. phenyl mercuric acetate aka PMA) and chlorinated phenols (eg. penta chloro phenol aka PCP). These products were effective in killing fungi but they were also very toxic to other living organisms, including humans. Newer types of microbicides came into use in the 1950s and 1960s which had relatively lower acute toxicity and a higher degree of specificity. These included phenolics, like para chlorometacresol (PCMC) and ortho phenylphenol (OPP), and 2-(thiocyanomethylthio) benzothiazole (TCMTB). These products were more specific to killing microorganisms at a low dosage. The use of organo mercury compounds and chlorinated phenols eventually became restricted, starting in the 1970s, and TCMTB emerged as the leading fungicide to be used in the leather industry because of its effectiveness, although it suffered drawbacks related to its toxicity and handling hazards.

Figure 1. Zenith operates tropical chambers for the accelerated mould resistance testing of leather. These chambers are automated to maintain ideal conditions of temperature, humidity and air movement to promote rapid mould growth. The chambers typically contain at least 20 different species of fungi actively attacking the leathers under test. Under these extreme conditions, leathers without proper protection fail within the first week of testing.

The need for sustainable fungicides

As more detailed toxicity information was generated for these newer microbicides, it became apparent that some of these might exhibit chronic toxicity, meaning they could cause ill effects as a result of periodic exposure to small amounts over time. In 2006, the EPA classified TCMTB as a possible human carcinogen, based on animal studies2. This triggered similar announcements being made, such as in the Pesticide Action Network (PAN) in the UK, which listed TCMTB in its List of Pesticides that Cause Cancer3. As a result of this classification, and with all of its leather fungicide products based on TCMTB at the time, Zenith decided to initiate a project to develop newer, safer fungicides for the leather industry to replace its TCMTB products. The fungicides used in the leather industry have traditionally been “industrial microbicide concentrates”, having high active levels of 30%, 50% and even 100%.

These products were meant for use in multiple industries. The leading fungicides used in leather in the U.S are EPA-registered for use in over 30 different industrial applications besides leather, such as adhesives, cooling tower water, metal working fluids, pulp and paper mills, oil recovery drilling mud, sewage effluent water, wallpaper, and wood.

As they are concentrated industrial chemicals, these fungicide concentrates exhibit high acute toxicity and hazardous handling characteristics, similar to concentrated acids and alkalis. They are therefore classified as “Hazardous Substances”, also known as “Dangerous Goods” (DG). Because they are meant for use in many different industries, this “one-size-fits-all” product approach has the disadvantage that one product cannot perform optimally in all types of systems and environments. The products also work in leather, but a large proportion of the fungicide is often not taken up by the leather and is lost to the effluent. This means that hazardous waste is generated in the leather making process. Zenith’s approach to developing new fungicides broke with past practices by setting the objective of creating fungicidal products designed specifically and exclusively for use in leather. Such tailor-made products would be far more efficient for use in leather than one-size-fits-all industrial concentrates. This would allow for lower usage levels of fungicide as well as lower active content in the fungicide formulation. This in turn would produce a less concentrated product with lower toxicity and safer handling characteristics. In essence, this was a very simple and logical approach but at the same time it was ground-breaking since it had never been done before. The basic requirements for such a product were that it should perform with maximum efficiency in leather (with drastically reduced waste in the effluent), requiring lowest possible dosage levels and active ingredient levels, and secondly that the fungicidal active have a “clean” toxicity profile.

The first critical stage in Zenith’s development project was to create a “carrier” system designed to effectively disperse in tanning systems with good stability in high electrolyte solutions. This carrier would be the vehicle to deliver the fungicide active into the leather to achieve maximum possible uptake with minimum residuals remaining in the tanning liquors. Furthermore, this carrier was to be made without the use of components that are unfriendly to people or the environment, such as organic solvents. Following extensive formulation development work and performance testing, a carrier system was developed which proved very effective and consistent in performance. The second stage was to identify a suitable active substance with fungicidal efficacy profile covering all fungal species that attack leather. The active was also required to have a clean toxicity profile. Finally, the active was to possess appropriate physical characteristics allowing it to be formulated into the carrier. A number of suitable actives were identified as meeting all the requirements. Several formulations were found to be very effective using very low active levels ranging from around 4-9%. One of these new products, designated Zenith 399, is based on the fungicidal active octhilinone, which is an alkylthiazole with a broad fungicidal spectrum of activity, excellent toxicity profile and is compatible in the carrier formulation. This product was selected for more in-depth testing.

Performance data were developed by application of the product under full-scale tannery conditions at numerous tanneries. The product was applied under identical conditions to the commercial fungicide in use at the tannery and at the same use level or at equal cost. Cuttings taken from the production runs treated with the new fungicide and with the commercial fungicide in use were evaluated for their mould resistance using the industry standard “tropical chamber” test. This is an accelerated test based on the ASTM Standard Test Method D7584 (American Society for Testing and Materials). Zenith operates automated tropical chambers that are maintained at a temperature of approximately 30˚C and a relative humidity level of 95-98%. See Figures 1 and 2. The Zenith chambers typically contain at least 20 different species of fungi actively attacking the leathers under test. Without proper protection, leathers fail within the first week of testing. Samples are rated weekly for mould growth on a scale from 0 to 100 (with 0 being no mould and 100 being fully covered with mould). Leathers must pass four weeks in the tropical chamber to possess long-term mould resistance. See examples of tested leathers in Figures 3 and 4. Extensive testing performed on thousands of leathers consistently showed the new Zenith fungicide to outperform the TCMTB standard in terms of providing longer protection, with lower use levels, and lower treatment cost. Figures 5 and 6 show performance comparisons with TCMTB and a competitive fungicide containing the same fungicidal active as the Zenith product and at the same active content. 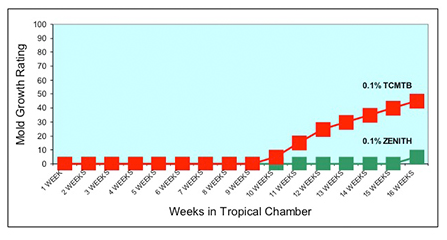 Fungicide T (9% active content), a competitive fungicide containing the same active ingredient as Zenith. The Fungicide T leathers remained mould-free for only two weeks. The Zenith leathers remained mould-free for 15 weeks. Although both products contain the same active ingredient and at the same active content, the competitive product Fungicide T at the much higher dosage level of 0.35% provided protection for only two weeks, while the Zenith product at a dosage of only 0.1% provided protection for 15 weeks. This study illustrates the importance of the Zenith proprietary formulation technology, which is specifically designed for use in leather.

Zenith has successfully developed and introduced a series of new green fungicides for the leather industry. These products are different from any other fungicides in performance and physical characteristics. Unlike any other fungicide, the products are water-clear liquids that have no odour.
The first of these products to be introduced has been in commercial use for more than five years. Over 400 tanneries in more than 10 countries are now using the products. All of Zenith’s TCMTB business has been replaced by this new green technology.
The types of leather being protected include wet-blue, wet-white, vegetable tan, retanned and finished leather. Articles produced include furniture and automotive upholstery, footwear, garments and more.

These new products meet the definition and key principles of Green Chemistry:

• Design chemical products and processes that reduce or eliminate the use or generation of hazardous substances.

• Design chemicals that are fully effective with minimum toxicity.

• Design chemicals without solvents or with safer solvents.

• Design chemicals that do not persist in environment.

Zenith green leather fungicides provide a safe, green and effective alternative to other fungicides, demonstrating that green chemistry does not require making compromises in performance or cost.

And Need Our Help?